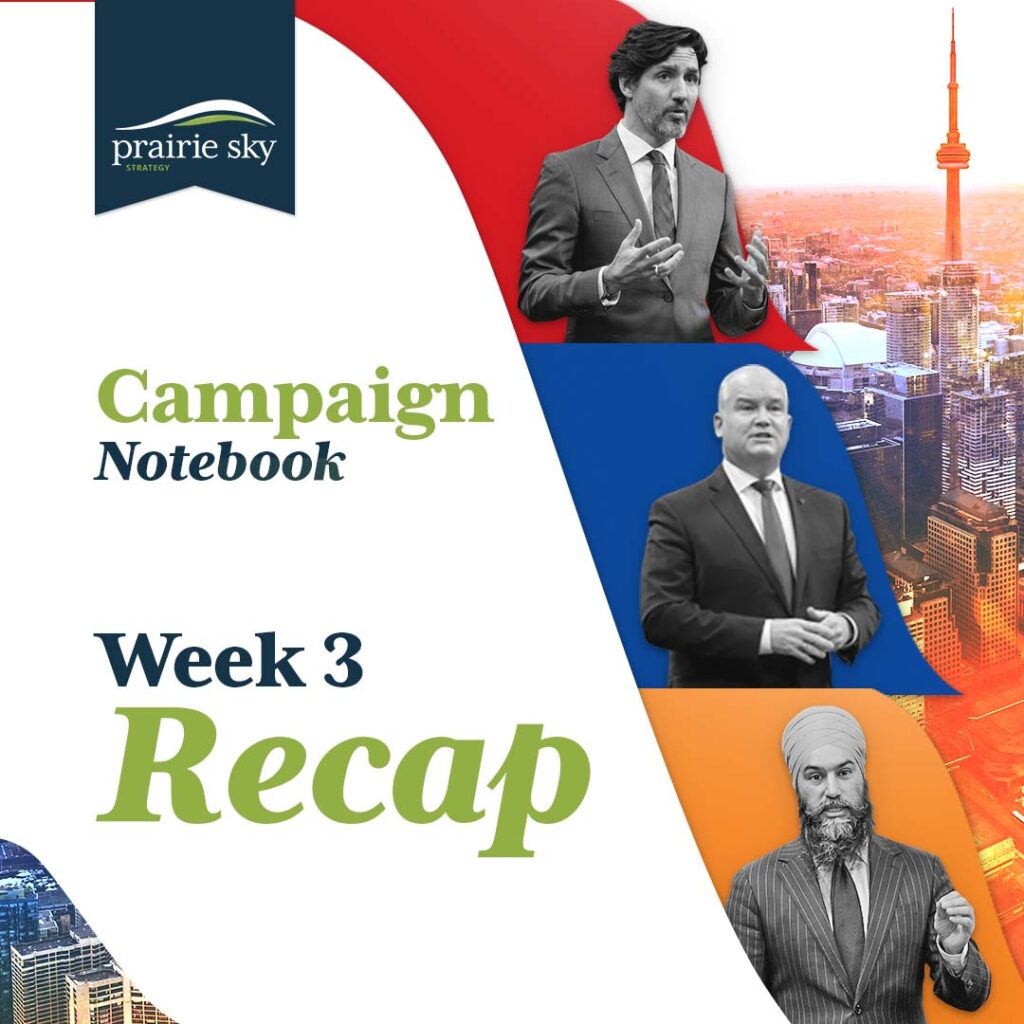 Yesterday marked two weeks until Election Day, with Canadians heading to the polls on September 20th.  The third week has seen minimal movement in the polls, with the Liberal and Conservative Parties remaining neck and neck. The Liberals focused this week on targeting the Conservative leader on vaccines and changing his position on gun policies. Last week also featured the first French debate, with no leader landing any defining punches.

The latest CBC Poll Tracker has the Conservatives remaining ahead with a narrow lead over the Liberals, however the Liberals remain favoured to win the most seats.

Conservatives:
Day 16: From a dog rescue in King City, Erin O’Toole released the Conservative animal welfare plan, which includes banning puppy mills, banning cosmetic testing on animals, adding animal cruelty as an aggravating factor in domestic violence cases and working with shelters to help support women fleeing domestic violence to ensure they don’t have to leave their pets behind.

Day 17: In the CPC studio in Ottawa, the Conservative leader touched on his plan to balance the budget over the next decade, which included a promise to not make cuts to any services.

Day 18: While in Ottawa, Erin O’Toole announced the CPC’s infrastructure plan, which includes support for specific projects such as the Calgary Green Line, scrapping the Canada Infrastructure Bank and building digital infrastructure to connect all of Canada by 2025.

Day 19: No announcement or events were held with the Conservative leader that day, leading into the TVA debate.

Day 20: While in Montreal, the Conservative leader announced his party’s plan to crack down on gang violence, which includes bringing in tougher laws and giving police and partner organizations additional resources to keep youth out of gangs.

Day 21: From Coquitlam, the CPC leader announced his plan to fight the fourth wave of COVID-19.

Day 22: From the Vancouver Port, Erin O’Toole released the Conservative plan to hire an additional 200 RCMP officers and provide additional supports to police forces across the country, especially focused on more training in the areas of sexual exploitation, cyber-security and online offences, and investigations into sexual offences.

Day 18: From Toronto, a day ahead of the first French debate, Justin Trudeau released the Liberal platform, which focused on the COVID-19 response, health care, families and climate change.

Day 19: The Liberal leader spent the day in Montreal preparing for the debate that evening.

Day 20: In Mississauga the Liberal leader held a media availability, though made no new announcement.

Day 21: There was no announcement or events held.

Day 17: While campaigning in British Columbia, Singh announced the Party’s plan to target house flippers as part of their Housing plan and committed to increasing the taxable amount of capital gains profits from 50% to 75%.

Day 18: From Montreal, the NDP leader made an additional announcement on the NDP’s housing plan, which included using federal land to build affordable housing.

Day 19: The NDP leader held a media availability in Montreal to talk about affordability and climate change ahead of the first debate that evening.

Day 22: From Ottawa, the NDP Leader shared his plan to combat COVID-19.