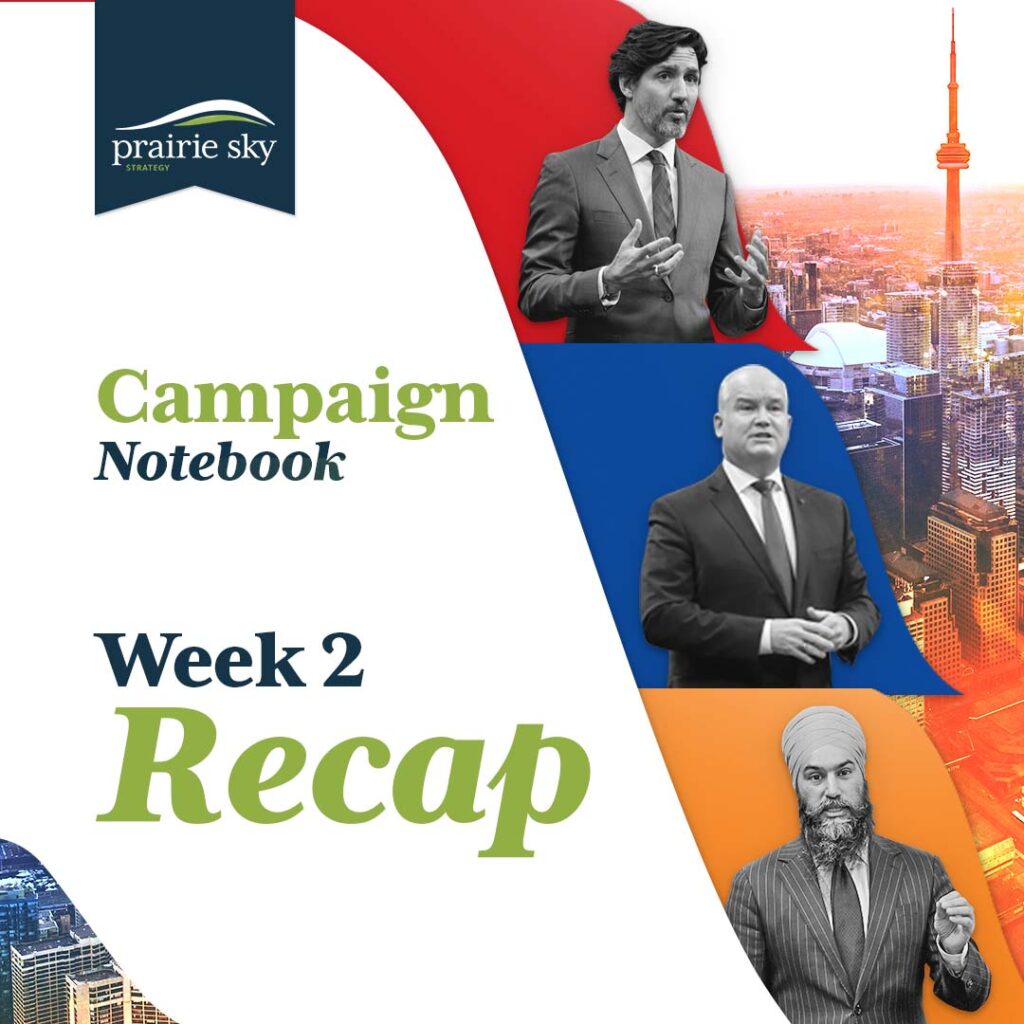 Yesterday marks two weeks since Prime Minister Trudeau triggered an election, sending Canadians to the polls on September 20th.  The second week has seen more movement in the polls, with the Liberal and Conservative Parties neck and neck. The campaigns spent the week crisscrossing the country, targeting key ridings. The Liberals have tried to regain ground while being faced with protests at events and announcements, which have led to the cancelling of engagements for security reasons.

The latest CBC Poll Tracker has the Conservatives ahead in voting intentions for the first time in nearly 18 months; as they inch higher the Liberals are still projected to win the most seats, again with a minority.

Conservatives:
Day 9: From the CPC studio in Ottawa, Conservative Leader Erin O’Toole announced that a Conservative government would require federally regulated companies, with over 1,000 employees or $100 million in annual revenue to include employer representation on their board of directors.

Day 10: Again in the studio, the Conservative leader announced that as part of Canada’s Recovery Plan a Conservative government would change the law so any company that goes bankrupt or is going through a restructuring must protect the pensions of their employees. This includes preventing executives from paying themselves bonuses during a restructuring unless the pension plan is fully funded and requiring companies to be more transparent with their employees by mandating they report the funding status of their pension plans.

Day 12: Returning to Ottawa, the Conservative leader announced a plan to protect gig workers by ensuring their access to EI benefits.

Day 13: From Corner Brook, Erin O’Toole announced that a Conservative government would increase EI benefits for seriously ill workers from 26 to 52 weeks.

Day 14: While in Fredericton, Erin O’Toole talked about the Conservative plan to make life more affordable including bringing in legislation on open banking so that fintech companies can give better offers on services such as mortgages, lines of credits or credit cards, rejecting mergers that reduce competition and lead to higher prices, and ordering the Competition Bureau to investigate banking fees.

Day 15: While in Saint-Hyacinthe, Erin O’Toole introduced the Conservative plan to help small businesses recover from COVID-19. The Main Street Recovery Plan introduces the Rebuild Main Street Tax Credit, which provides a 25% tax credit on amounts of up to $100,000, introducing a Rebuilding Main Street Business Loan and the Canada Investment Accelerator tax credit.

Liberals
Day 9: While in Halifax, the Liberal leader, Justin Trudeau, announced that a re-elected Liberal government will spend billions to hire family doctors and cut down waitlists.

Day 11: While in Surrey, Justin Trudeau announced that a re-elected Liberal government would raise the corporate tax rates paid by banks and insurance companies to 18% on their earnings over $1 billion.

Day 13: From Mississauga, the Liberal leader announced that if re-elected he would create a 1 billion-dollar fund to help provinces create their own vaccine passports.

Day 14: Speaking from Cambridge, Justin Trudeau unveiled the Liberal Party’s environment platform, which includes regulating total emissions from Canada’s oil and gas producers to get them to net-zero by 2050, creating a $2 bullion fund to create jobs in oil and gas reliant communities and introducing an interim electric vehicle mandate, which will require half the cars sold in Canada to be zero-emission by 2030.

NDP
Day 9: While in Montreal, NDP leader Jagmeet Singh announced that if elected his government would eliminate subsidies for oil and gas companies, replacing them with direct funding for renewable energy projects.

Day 11: Making an announcement in Windsor, the NDP leader released his plan to lower cell-phone and internet bills, which includes working with the CRTC to force telecom companies to reduce prices and cap their fees below the global average and unlimited wireless data options at an affordable rate.

Day 13: While in Thunder Bay, the NDP leader announced that if the NDP is elected to lead the government universal pharmacare would start as early as next year, working with the provinces to make prescription drugs free.

Day 14: In Sudbury, Jagmeet Singh vowed that if elected Prime Minister, he would eliminate interest on student loans as well as forgive student debt.

Day 15: While in Yamichiche, Jagmeet Singh unveiled an NDP website designed to help people understand how to vote.