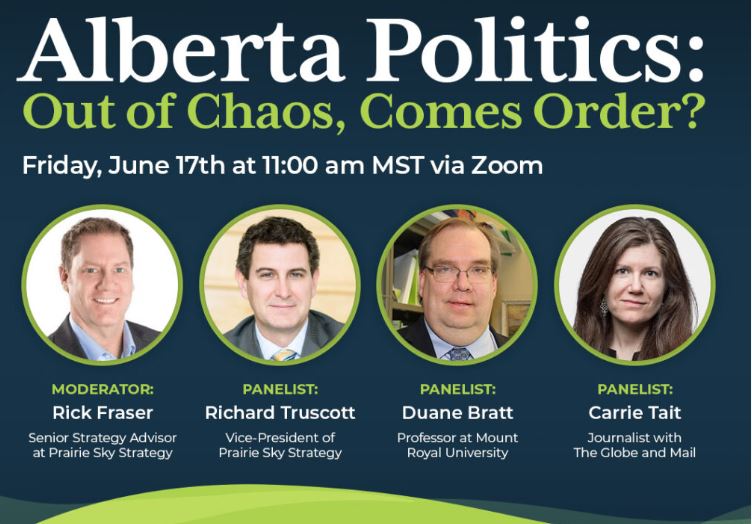 For decades, Alberta politics was boring. The long-governing Progressive Conservative party seemed like it would have a grip on power forever. But the last 10 years have been tumultuous, to say the least. From the rise of the Wildrose Party, to the election of the first-ever NDP government in Alberta’s history in 2015, followed the reunification of conservatives under the United Conversative Party (UCP) banner, and a majority government in the 2019 election, all these major political milestones lead us to present day. On May 18th, after learning he only had the support of 51.4% of the UCP’s members, Jason Kenney dropped a bombshell by announcing he would be stepping down as leader after only three years as premier. Watch this  webinar to hear from three political experts about the impact of these latest twists and turns may have on the future of the province, how the race is shaping up to replace the leader, if the opposition parties stand to benefit, and what the lead-up to the May 2023 election will looks like.

Our exclusive panelists include:

Duane Bratt, PhD, Professor, Mount Royal University
Duane Bratt is a political science professor in the Department of Economics, Justice, and Policy Studies at Mount Royal University (Calgary, Alberta). He was educated at the Universities of Windsor (BA 1991, MA 1992) and Alberta (PhD 1996). He teaches international relations and Canadian public policy and is co-editor of the forthcoming book Blue Storm: The Politics of the Jason Kenney Government. Duane is also a frequent media commentator on political events in Alberta.

Carrie Tait, Journalist, Globe and Mail
Carrie Tait is a professional journalist who joined The Globe and Mail’s Calgary bureau in January 2011. Previously, she spent six years working for the National Post in both Calgary and Toronto. She has a master’s degree in journalism from the University of Western Ontario and a bachelor’s degree in political studies from the University of Saskatchewan.

Richard Truscott, Vice-President, Prairie Sky Strategy
Richard is a veteran of Alberta politics with over 30 years of experience in public policy and advocacy, government relations, crisis and strategic communications, public relations, and issues management. For more than a decade, he served in senior leadership roles with the Canadian Federation of Independent Business (CFIB), the nation’s largest association of independent businesses. Richard has a Bachelor of Arts degree in political science from the University of Calgary, an MBA from Queen’s University, and an accreditation from the Canadian Public Relations Society (CPRS).

Rick Fraser, Senior Strategy Advisor, Prairie Sky Strategy
Rick has had a distinguished career in health care, public safety, elected office and as a community volunteer and leader over the past 20 years. In 2004 he graduated from Augustana University/College as an Emergency Medical Paramedic Technician. In 2012, he sought and received the Progressive Conservative nomination for Calgary-South East and was elected twice in April, 2012 and again in May, 2015. In the April 2019 election he was defeated in his re-election bid and returned to service as a paramedic where he has served Calgarians ever since.