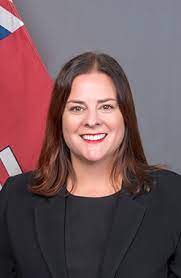 Today Progressive Conservative (PC) Party of Manitoba members voted in Heather Stefanson to become the party’s new leader. With the party having the majority of seats in the legislature she will become Manitoba’s 24th Premier and the first female premier in the province’s history.

It was a very close race that was decided by less than 400 votes. Over 16,000 ballots were returned by party members with Stefanson receiving 8,405 votes. Her opponent, former Member of Parliament and cabinet minister Shelly Glover received 8,042 votes.

Since a byelection in 2000 Stefanson has been the Member of the Legislative Assembly (MLA) for Tuxedo. Following the 2016 provincial election she was sworn into cabinet as Deputy Premier and Minister of Justice and Attorney General. On August 1, 2018 she was named Minister of Families before being named Minister of Health and Seniors Care earlier this calendar year. She resigned from cabinet on August 18, 2021 to launch her leadership bid.

Stefanson has a Bachelor of Arts degree in political science from the University of Western Ontario. Prior to being elected she worked in the offices of the Prime Minister, federal Minister of Agriculture and the provincial Education Minister. She also worked as an investment advisor and received her professional financial planning designation in 1997.

Her campaign focused heavily on listening to Manitobans, and she received endorsements from the vast majority of PC MLA’s and cabinet ministers. In addition to the COVID-19 recovery of the healthcare system her campaign platform included strengthening Manitoba’s immigration system through the Provincial Nominee Program. Addressing labour shortages and access to capital were also areas of focus on the economic side.

A date is yet to be set for an official swearing in ceremony with the Lieutenant Governor. In an interesting twist of fate Stefanson’s Tuxedo byelection win in 2000 was to succeed former Manitoba Premier Gary Filmon, the husband of Manitoba’s current Lieutenant Governor Janice Filmon.

One of the first orders of business for the new Premier will be in regards to the Fort Whyte byelection to fill the seat of former Premier Brian Pallister. The Liberal Party of Manitoba recently announced that former Winnipeg Blue Bombers star Willard Reaves will be their candidate in the byelection. Since the Fort Whyte riding was created in 1999 it has always gone solidly conservative.

If you have any questions please contact Michael Juce at michael@prairieskystrategy.ca